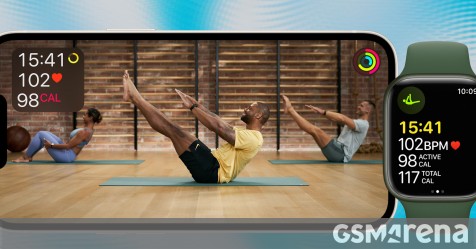 Fitness+ courses are available in English but Apple will add subtitles in six languages, but as of yet we’re not clear which languages those are.

Pilates are the latest workout to come to Fitness+ with two new trainers – Marimba Gold-Watts and Darryl Whiting. All workouts will be 10, 20 or 30 minutes long and will cater to different skill levels.

Group workouts with SharePlay will allow up to 32 people to watch and do a workout at the same time. A group workout will feature Activity rings and a Burn Bar, which will get their info from the Apple Watch so the participants can see each other’s progress.

Fitness+ is $9.99 per month or $79.99 on a yearly basis. It’s included with Apple’s One Premier plan and there’s a three month grace period with a purchase of an Apple Watch Series 3 or newer. Every Apple Watch user gets a free month of Fitness+ as well.