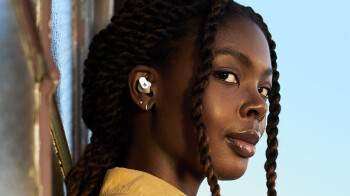 Apple’s recently announced Beats Studio Buds confirmed all the rumors about them that we’ve been hearing for a few months now. At first brush, they seem like a prime candidate to compete with Apple’s AirPods Pro, what with the active noise cancellation (ANC) abilities and all.

The Beats Studio Buds, however, sit below the AirPods Pro in the pecking order as they don’t offer wireless charging and don’t have Apple’s H1 chip for seamless handoff connectivity with its devices. They do come for a Benjamin less, though, and have a completely different buds design without stems when compared to Apple’s AirPods.
The sportier exterior means they are also quite different from the regular AirPods, and the difference under the hood is no less startling – the Beats Studio Buds have ANC – for basically the same price.

As you can see, Apple has managed to fit the new Beats Studio Buds right between the regular AirPods and the Pro model, decking them out with more colors to choose from, longer ANC battery life, and a completely different design.

Thus, those who want the street cred stemming from the Apple AirPods stem hanging from your ear would pick the regular Pods, while the price-conscious will look for more bang for their $149 and go with the Beats Studio Buds. On the other hand, the AirPods Pro Amazon deal below brings them much closer to the Buds in terms of pricing, so the choice becomes harder.

It’s not in Apple’s DNA to cannibalize its products all that often compared to the competition, so which ones would pick if you had the chance (Beats Studio Buds will be released June 24)?