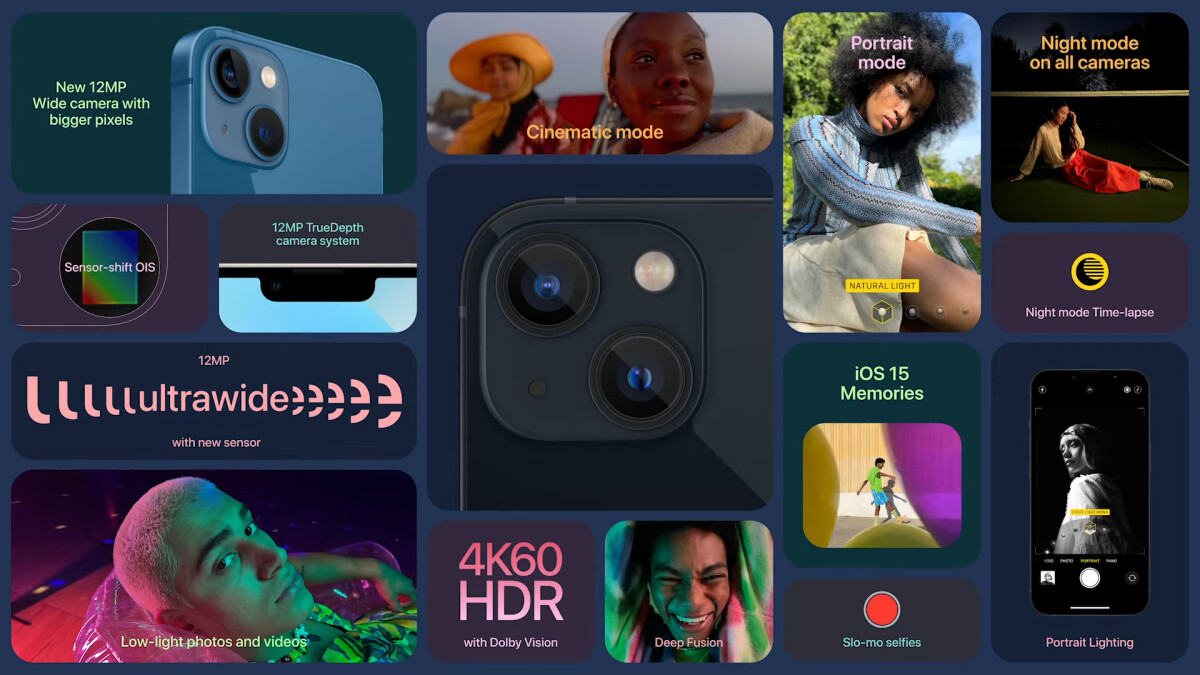 As rumored, Apple has shrunk the notch by roughly 25% by moving the earpiece up top, and miniaturizing the Face ID kit components further. The back has gotten a diagonal camera lens setup on account of the larger sensors which are said to be inherited directly from last year’s 12 Pro/Max models.

Both front and back design changes are immediately noticeable, making the iPhone 13 vs iPhone 12 differences very visible. Rest assured, everyone on the club table and on the street will know you are rocking the latest iPhone model when you get the 13.

Apple kept the rich palette of the color scheme, too, as the iPhone 13 is available in pink, blue, midnight, starlight, and product red, something for everyone’s taste but the most somber of business people.

A larger battery necessitated a slightly thicker body, while the slightly offset buttons around the iPhone 13, and the rearranged camera bump mean that your iPhone 12 case won’t fit the iPhone 13 now, bummer. Apple will gladly sell you a variety of new iPhone 13 silicone, leather, and hard cases, though, so you’ll be starting completely fresh indeed.

Taking a cue from the Pro versions of yesteryear, the iPhone 13 has seemingly borrowed the main camera module of the 12 Pro Max, complete with its Sensor Shift image stabilization. We all know the great pictures that the 12 Pro Max takes, and the larger sensor is now going mainstream on the iPhone 13, ready to capture cleaner, sharper Night mode shots.
The ultrawide angle camera got an upgrade, too, if not in sensor resolution, then in lens aperture which is now much wider than what the iPhone 12 series offers, able to let more light in and snap sharper, better looking group and landscape pictures. All in all, a brand new camera set awaits you on the iPhone 13, even if you are coming from last year’s 12, let alone if you’ll be doing the most popular iPhone 11 to iPhone 13 upgrade.

When we add the new Apple A15 chipset that is crafted with the second generation of a 5nm process that Apple was first to use with the iPhone 12, the camera advancements become even more effortless.

The crazy power that A15 offers now allows Apple to do some professional photography and editing tricks such as a Cinematic video mode that adds adjustable bokeh to the footage and requires an insane amount of processing oomph to work right. Don’t expect killer benchmark scores, though, the A15 is just about 7% faster than the A14 but is more power-efficient, which should bode well for the iPhone 13 battery life from the larger, 3095mAh pack that Apple now uses.

All those camera and processing upgrades won’t come cheap? Why, the iPhone 13 is priced similar to its predecessor at launch for the base 128GB model, and going in $100 increments from there.

Wait, what, the iPhone 13 now comes with at least 128GB of storage?! That’s right, the spirit of Gandhi finally flew over the ocean and anointed Apple’s sales and marketing team to come up with the best gift they could give to iPhone fans, the gift of storage. What do you think, did Apple hit the sweet iPhone 13 price spot this time around?