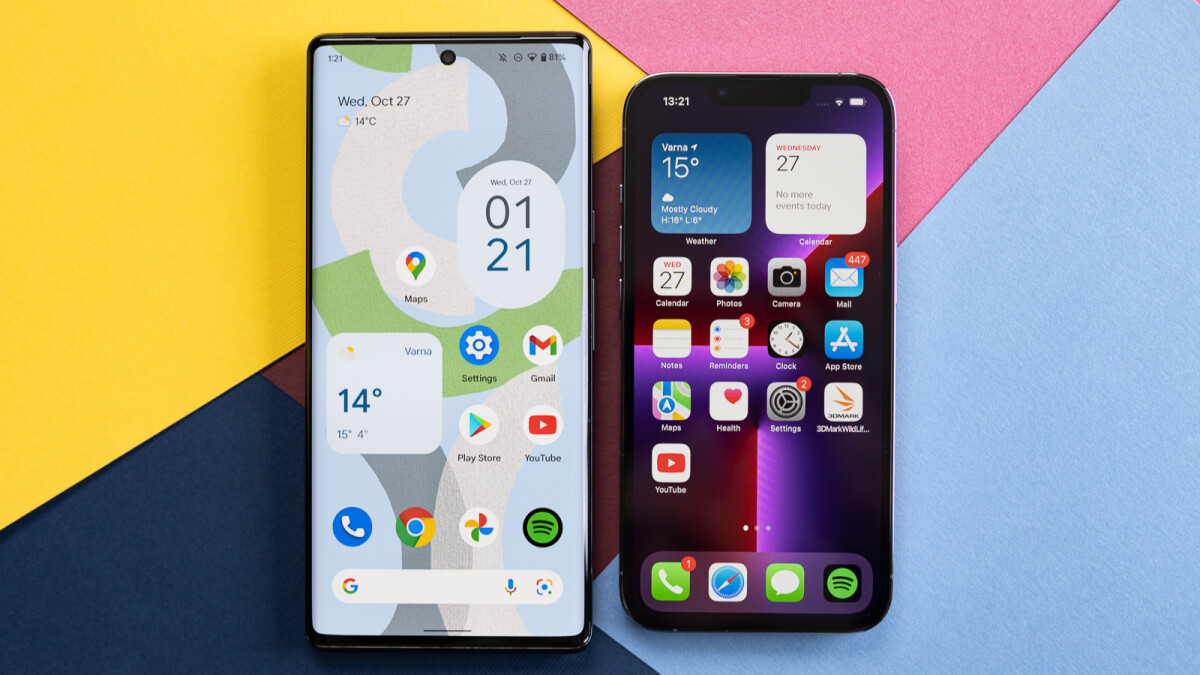 With Google’s sudden official unveiling of the Pixel 6 series on August 2, it’s hard not to ask ourselves how Google‘s upcoming flagship will fare against its rival – Apple and its 2021 iPhone 13 series.While the Google Pixel 6 is yet to be announced, Apple unveiled the iPhone 13 Pro on September 14, 2021. In any case, we already have enough intel in order to do an early comparison between the two, right here. Stay tuned, as this article will be updated with official specs and information, as soon as it becomes available.

So, should you go team Android or team iOS? Does Google’s 2021 flagship Pixel 6 Pro offer enough to sway you from Apple’s iPhone 13 Pro and vise-versa? Let’s find out!

The Google Pixel 6 Pro was officially revealed on August 2, 2021 and is expected for release this fall, but its precise release date is still to be announced. Currently, based on the previous Pixel release dates, we can expect the Pixel 6 Pro to be released somewhere around October 20. However, Google’s early announcement of this series, as compared to previous years might mean an earlier release date also. Stay tuned.The iPhone 13 Pro was officially announced on September 14, and starts shipping Friday, September 24, 2021.

Google says that the Pixel 6 Pro “will certainly be a premium-priced product”, so we don’t expect it to be much cheaper than the iPhone 13 Pro, if at all. Currently, the Pixel 6 Pro price tag is expected to be somewhere around the $899-999 range.The iPhone 13 Pro starts at $999 for the base 128GB model and goes up to $1499 for the maximum 1TB of storage variant.

It’s safe to assume that buyers will have to drop at least $999 for either premium smartphone.

The Google Pixel 6 Pro has quite a unique back design, significantly more premium and distinct than its predecessors. The rear of the phone has a triple-tone hybrid aluminum design, with a raised glass-covered camera module that matches the width of the phone. The Pixel 6 Pro’s frame is made out of polished aluminum also.From the front, the Pixel 6 Pro looks like a conventional 2021 flagship with minimal bezels and a holepunch selfie camera in the top of the display. Speaking of which, it’s a 6.7-inch QHD+ display with a 120Hz refresh rate, and it’s very slightly curved around the edges.

The Pixel 6 Pro will be available in the following colors: Black, Silver and Gold.

As for the iPhone 13 Pro, while it’s similar to its predecessor in its flat-edge design, flat display, with a glass back and aluminum frame, it does have a 20% smaller, more narrow notch. Other than that, we have the same premium build we’ve come accustomed to from all of Apple’s recent flagship iPhones.

The screen of the iPhone 13 Pro is 6.1 inches, OLED and supports an adaptive refresh rate of up to 120Hz, just like the Pixel 6 Pro.

The iPhone 13 Pro will be available in the following colors: Sierra Blue, Silver, Gold, Graphite.

The unique-looking camera module of the Pixel 6 Pro is housing a 50MP wide camera, a 48MP telephoto camera with 4x optical zoom and a 12MP Ultra wide camera. We’re yet to know more about those, but the ultra-wide camera in particular is said to be able to take in 150% more light than before. Google’s Tensor chip will bring improved AI performance for better and faster photo processing.As for the Pixel 6 Pro’s front holepunch selfie camera, it’s 12 megapixels and presumably able to shoot up to 4K video. The Pixel 6 Pro selfie camera might even have a dedicated LED ring, which would be quite unusual. This information is based on code found in Android 12, and we’re yet to know if it holds true.

The iPhone 13 Pro’s familiar but larger camera module packs three cameras, all 12MP, two of which are a telephoto and an ultra wide one with macro support. Inside its notch, next to the FaceID setup the iPhone 13 Pro is to pack a 12MP selfie shooter.

The Pixel 6 Pro will most likely be coming with Android 12, which has been notably updated with a fresh new look. Android 12’s Material You design language is playful and vibrant, bringing a long-needed change to the operating system’s appearance.Unlike Apple’s iOS, Android 12 is focused on solid, flat colors and, of course, is allowing for complete user customization. Material You’s color palette will even automatically change based on the Pixel 6 Pro’s wallpaper, so each user’s Pixel can potentially look and feel slightly different.

Apple’s iPhone 13 Pro comes with iOS 15 out the box. iOS 15 brings improved Maps, Facetime and Safari apps, as well as Notification Summary and Focus features for better notification organization. The Photos app is now able to recognize and translate text from your photos and turn it into text you can copy, all on-device as opposed to relying on a cloud service.

Aside from its cleaner Safari redesign, iOS 15 isn’t too different in its appearance from iOS 14 – aside from its support for widgets, not much new in terms of user customization. But, of course, with all of Google’s talk about privacy, we can’t skip the fact that Apple is proven to focus on user privacy even if it means dumbing down some of its assets (e.g. Siri). Apple continues its efforts to make iOS perform everything on-device and collect as little user data as possible. Along with that, Apple’s App Tracking Transparency not only lets users know clearly what data each app wants to collect from them, but it lets them opt out of being tracked, which left Facebook particularly unhappy with Apple.

It’s also worth noting that the Pixel 6 Pro will be powered by Google’s own custom-made chip called Tensor, as opposed to going with a Qualcomm Snapdragon processor. Similarly, Apple’s iPhone 13 Pro will be packing Apple’s own A15 Bionic chip. And while we expect both phones to be great performers, stay tuned for our respective performance benchmarks and reviews later this year, for the concrete data.

Apple Watch – 1; Burglar – 0. In a story that almost sounds like straight out of a movie