I switched from big Android phones to the iPhone 13 mini: Any regrets? 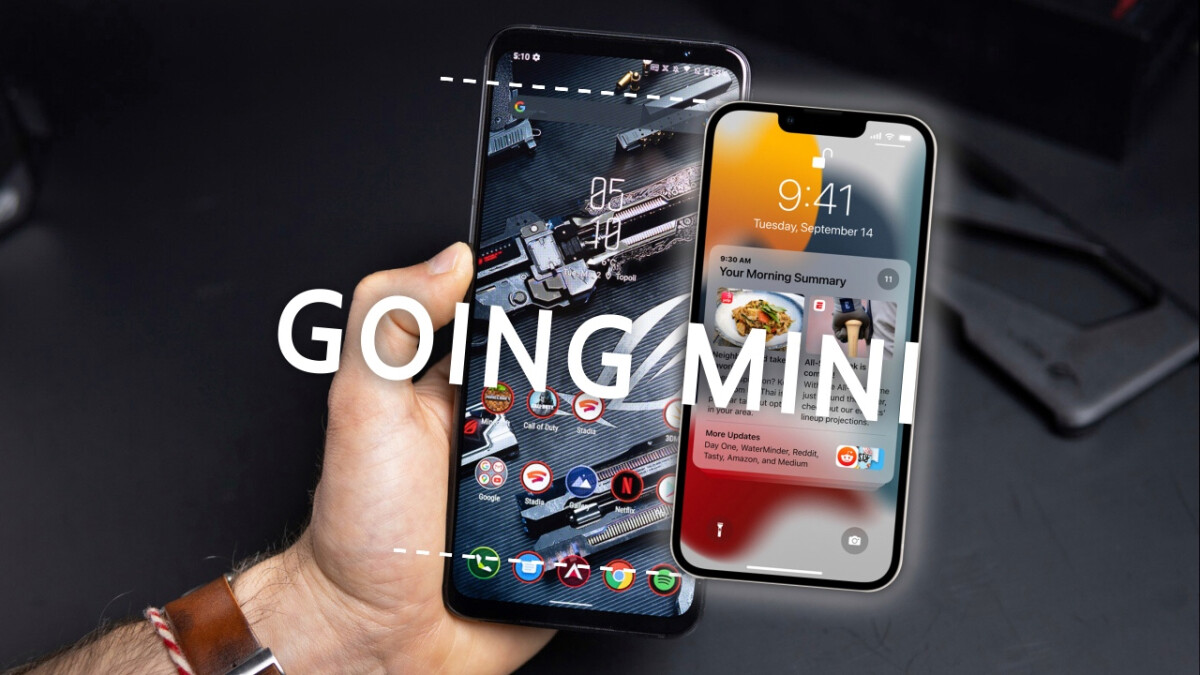 I switched from big Android phones to the iPhone 13 mini: Any regrets?

Those phones weigh between 211 and 271 grams (9.56 oz), they take up a whole lot of pocket space and you definitely feel their heft carrying them around all day.

However, the benefits of their size and weight include having a large display for video watching and social media browsing, and in most cases – a great big battery that can hold a charge for quite a while.

But when the iPhone 13 mini recently got released, I thought I’d switch things around and try a vastly different smartphone experience – something so tiny and lightweight that I can easily forget it’s even with me. And it’s a flagship? Sign me up! Plus, I’m not that accustomed to iOS, so I thought it’s high time to gain more experience with it.Was it a big adjustment? Let me share my experience with you, starting with the more notable issues I had to get accustomed to…

Say goodbye to watching videos and movies on your phone

Big phones, or phablets as we sometimes like to call them, excel when it comes to watching YouTube, Netflix and what not, anywhere. If you travel a lot and don’t feel like dragging a tablet or a laptop with you, nothing beats the simple convenience of having a large phone with you and enjoying your movies on the go, on it. No second device needed.And I indeed do plenty of watching when I travel, with the Asus ROG Phone 5 being one of my favorite phones for that, thanks to both its large OLED screen and what are in my opinion its industry-leading front-facing stereo speakers.

But then I switched to the iPhone 13 mini. A phone with a 5.4-inch display, and a notch taking some of it no less. All of the sudden, although not too surprisingly, watching YouTube videos and movies gradually became something I did much less on my phone, and much more often on my laptop and iPad instead.

If your eyesight is good, I suppose you’d be able to watch the occasional clips on a phone this small without feeling like it’s too much of a handicap, but I guess my eyesight just isn’t that perfect.Especially when I fired up Netflix and finally decided to watch the Squid Games series, I couldn’t possibly enjoy the experience, as I started missing tons of details. A 5.4-inch display just isn’t enough to watch engaging, long-form content. To be fair, this isn’t the phone’s fault, it’s arguably not even made for people who’d go and watch movies on it, but still, I have to mention this.

Not being able to watch movies or even YouTube videos comfortably anymore has been the biggest drawback for me, but wait, there’s more…

At first glance the on-screen keyboard on the iPhone 13 mini isn’t too small-looking, and I even figured it should be large enough for me to hit the keys that I want precisely, but that actually happens almost never. I somehow often press wrong surrounding keys and ending up with typos. And it gets frustrating quick.Yesterday I wrote my first YouTube comment in virtual reality, on a virtual keyboard, and I kid you not, it took a bit longer but I made much less typos than I usually do on the iPhone 13 mini.

That being said, if you use slide typing (Apple calls it QuickPath), the text prediction and results are normally good. QuickPath is a decent option for writing short messages with simple words that the iPhone can predict. But I won’t be writing any emails on this smartphone, that’s for sure, once again having to reach for an iPad or my laptop instead.

In contrast, I did write a lot on my big Android phones. And I believe the thumb typing experience on the Galaxy Z Fold 3 in particular is the best you can get on a smartphone today. The size of its folding screen, and in turn the on-screen keyboard is just perfect.

I gave my old 2017 Xiaomi Mi Max 2 to my dad and it still lasts him up to five days on a single charge. The more recent big phones that I’ve used, like the 2021 Asus ROG Phone 5 Ultimate are also battery champs thanks to the huge batteries they pack, usually between 5,000 and 6,000 mAh.But the iPhone 13 mini is tiny, and in turn, its battery is just 2406 mAh. That’s not to say the battery life is bad by any means, at least when you’re just browsing the web, but in our YouTube playback battery test it lasted just 6 hours and 20 minutes. And last year’s iPhone 12 mini lasted an hour less, even.

This is not a phone that you can pick up and rely on for more than a day, unfortunately. Meanwhile, my dad’s 4-year-old $230 Xiaomi phone still lasts five days, as mentioned, and he uses it a lot! Seemingly no battery degradation, no nothing.

I really hope Apple puts more effort into improving the battery life, whether through software updates or on the 2022 iPhone 14 series. Because battery life might eventually become the main reason I switch back to an Android phone.

If there’s one thing that’s really important to me, yet seemingly unimportant to most phone manufacturers and users, it’s a phone’s speaker quality.

The iPhone 13 mini doesn’t have bad speakers, but they’re still rather tinny. One is just the earpiece which only produces highs, the other is a bottom-firing speaker with a bit more mids and low-end.

You get a decent stereo effect because those are technically two speakers on two different ends of the phone, but the sound is ultimately tinny, especially when compared to my previous phone, the king of phone speakers – the Asus ROG Phone 5.

iOS is missing Android features and apps that I use

Split screen multitasking is all I want from iOS, everything else I can live without

In our recent article that focused on three key Android power user features the iPhone 13 is still missing, we asked you to vote whether you’d actually use them. One of those features was split screen multitasking, and the majority of voters (68%) said that they want it on their iPhone.Me too. That’s the one major Android feature I wish iOS had, I could live without the rest. But always having to run a single app at a time on this powerful smartphone, that packs Apple’s hyped-up A15 Bionic processor inside, feels a bit ridiculous. I get that Apple’s strategy is to keep things simple, and that strategy clearly works great, but an optional split screen multitasking feature hidden somewhere in the accessibility settings would’ve been nice.

In regards to missing apps, I grew up tinkering with MS-DOS computers and for nostalgia purposes, I like having an MS-DOS emulator on my phone. And while on Android you can head on over to the Google Play store and download as many as you want, Apple has decided that such apps aren’t allowed on its app store.

And that’s just one example. Google is much more lenient in giving Android users the freedom to access a wide variety of apps, right from its Play Store, while Apple is blocking literally anything that may theoretically be used to run unlicensed content. I’m sure most users don’t even notice that there are plenty of apps missing from the iOS app store, that are available to Android users, but I do. And I don’t like restrictions.

Why did I switch to the iPhone 13 mini then? Here are the positives

Now that I told you the biggest hurdles I faced when switching from huge Android phones to the iPhone 13 mini, let me also share with you all the positives from doing so, because I’m definitely enjoying those!

Most significantly, having a small, lightweight smartphone to carry around has been a big change for the better. Before, I had to be careful with my choice of clothing, jeans with huge pockets were always a priority. And the weight and size of the phones were always an inconvenience, to the point of becoming unbearable in some instances, especially with the Galaxy Z Fold 3.

You don’t really realize it until you try it, but switching from that to a tiny flagship can be a very freeing feeling, and a small phone can still cover all of your basic needs. Despite the fact that the iPhone 13 mini is uncomfortable for the likes of watching videos, when it comes to playing podcasts on the go or watching stand-up comedy – it’s just perfect. And I’m really into those. Instagram and other social media apps look good on it too.

In addition, having a tiny phone that’s also a great portable camera is really something. I try to travel as much as I can, safely, despite the difficult times, and a tiny phone with such a good camera is super convenient to carry, over struggling to pull out a huge phone from a tight pocket every time you wish to capture a video.

Plus, let’s think old school – this is an iPod too. With some Bluetooth earbuds in your ears and your favorite songs on the iPhone 13 mini, it starts feeling just like a small, lightweight iPod from years gone by. I’m enjoying the simple pleasures with this phone.

If you stick to the basics, like music playing, short messaging, watching the occasional short-form social media clip, browsing Facebook and Instagram – having access to all that via such a tiny and portable device can be magical. Especially if you’re accustomed to giant, heavy, often plastic phones, a switch from those to Apple’s newest, smallest flagship can be a significant, refreshing new experience worth trying.

Amazfit GTR 3 Pro in for review