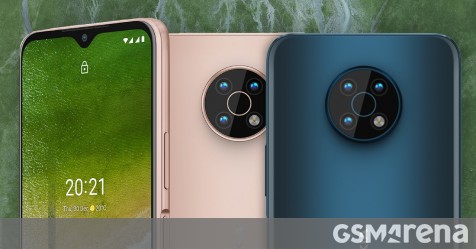 The yet to be announced Nokia G50 5G can’t keep itself out of the news – official images along with some details about the phone have been dug up by WinFuture. Apparently, the G50 aims to be an affordable phone for those looking for an entry into 5G. To sweeten the deal even further, Nokia will bundle the phone with a TWS headset in many regions.

This next-gen connectivity will come courtesy of the Snapdragon 480, Qualcomm’s first 5G-capable entry-level chip. This is also the chip inside Nokia’s X10 and X20 phones.

Unlike them, however, the G-series sticks with 720p LCDs. This one will measure 6.38”, making it little smaller than the Nokia G10 and G20 displays (both 6.52”). There’s no word on a high refresh rate. Also, the fingerprint reader is visible on the side.

The phone will be powered by a 4,850 mAh battery, which should go a long way with the efficient 8 nm chipset and HD display. We’re not too hopeful for fast charging, the G-series supports only 10W, the X-series boosts that up to 18W. But as established with the display, this is no X-series phone.

Anyway, the phone will have a triple camera on the back. The prematurely posted promo boasted about a 48MP main camera. We don’t know what the other two modules do, but the G20 has a 5MP ultrawide, plus a macro and a depth sensor.

The Nokia G50 5G has appeared at retailers with a lower price tag than the X10, Nokia’s current cheapest 5G phone. It will not be the cheapest on the market, we’re looking at a €230-250 price tag (it’s not clear if that includes the TWS headset, which will probably be a limited-time offer).

We still don’t have a launch date for the G50. There is also a more advanced X50 in the works too, the two may or may not be unveiled together.

MediaTek sets sights on US market, not worried about the chip shortage