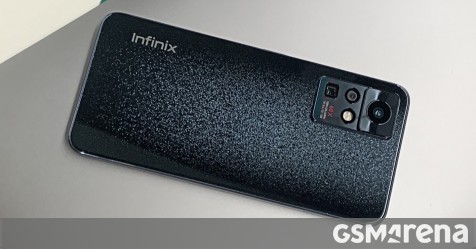 A few months ago we tested the 160W fast charging system by Infinix that was built into a concept phone. While the focus with that device was on the charging, it was also notable for having a 135 mm periscope lens that promised up to 60x digital zoom – this was the first time a periscope had graced an Infinix phone.

What we’re hearing through the grapevine is that the company is working on a periscope-equipped phone that will make it to retail. A source sent us two images of it. We’ll start with the one that shows a close-up of a fairly impressive camera setup.

The periscope is on the bottom and going by its markings it has a focal length of 125mm (that should be 5x magnification over the main camera) and an f/3.4 aperture. Those are fairly typical specs for a periscope, but this camera is well above what Infinix has put out so far (it only has a couple of telephoto lenses to its name and those were 2x).

The main camera is another first for the company’s stable of phones – it has a 108 MP sensor. We don’t know which one yet, but it is another big jump over previous models (they top out at 64 MP, for example, the Infinix Note 10 Pro that we’re in the process of reviewing).

That high resolution sensor should enable high quality digital zoom to bridge the gap to the periscope. And it has Optical Image Stabilization (OIS). Also, there’s an ultra wide-angle camera on the back with a 13mm lens.

We’re not 100% sure when this new camera-focused Infinix phone will be unveiled, but it shouldn’t be too long. We will report back as soon as we have more info.

Madhav Sheth talks about the upcoming Narzo 30 phones, the Realme GT launch in India and more