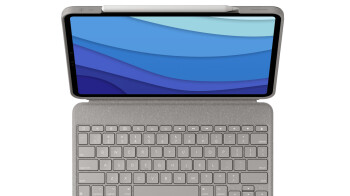 Logitech announced a new version of its Combo Touch keyboard for the 4th Gen iPad Air. Previous versions of the keyboard supported only the iPad Pro lineup and the iPad 7 and iPad 8. The Logitech Combo Touch is a more affordable alternative to the Apple Magic Keyboard, which has a full size keyboard with backlit keys. The Logitech keyboard also has a built-in trackpad with multi-touch gesture support, which is really important when navigating an iPad.

The iPad Air pairs with the keyboard via its Smart Connector, which means it does not need to be recharged. The case of the Combo Touch has an adjustable kickstand, with the keyboard being able to easily detach from it. There is a cutout for an Apple Pencil too.

Design-wise, the Logitech accessory offers a robust design, which also acts as a protective case for the iPad. A new Sand color for both the iPad Air and iPad Pro versions of the keyboard has been added. The other color option is called Oxford Grey. Both the keyboard and the case have a woven fabric finish. As for the price, the Logitech Combo Touch keyboard undercuts Apple’s Magic Keyboard by $100. You can purchase the iPad Air 4th Gen version of the Combo Touch on Logitech’s website.

The 4th Gen iPad Air was released in 2020. The newest iPad Air has a similar design to the more expensive 2020 iPad Pro series. The tablet acts as the mid-range Apple iPad, having the design of the iPad Pro, while being much more affordable. The 2020 iPad Air has a 10.9-inch 2360 x 1650 IPS LCD display. An Apple A14 Bionic processor coupled with 4GB of RAM powers the device. The cameras are a 12MP unit on the back and a 7MP selfie shooter on the front. 7,606mAh battery keeps the lights on.