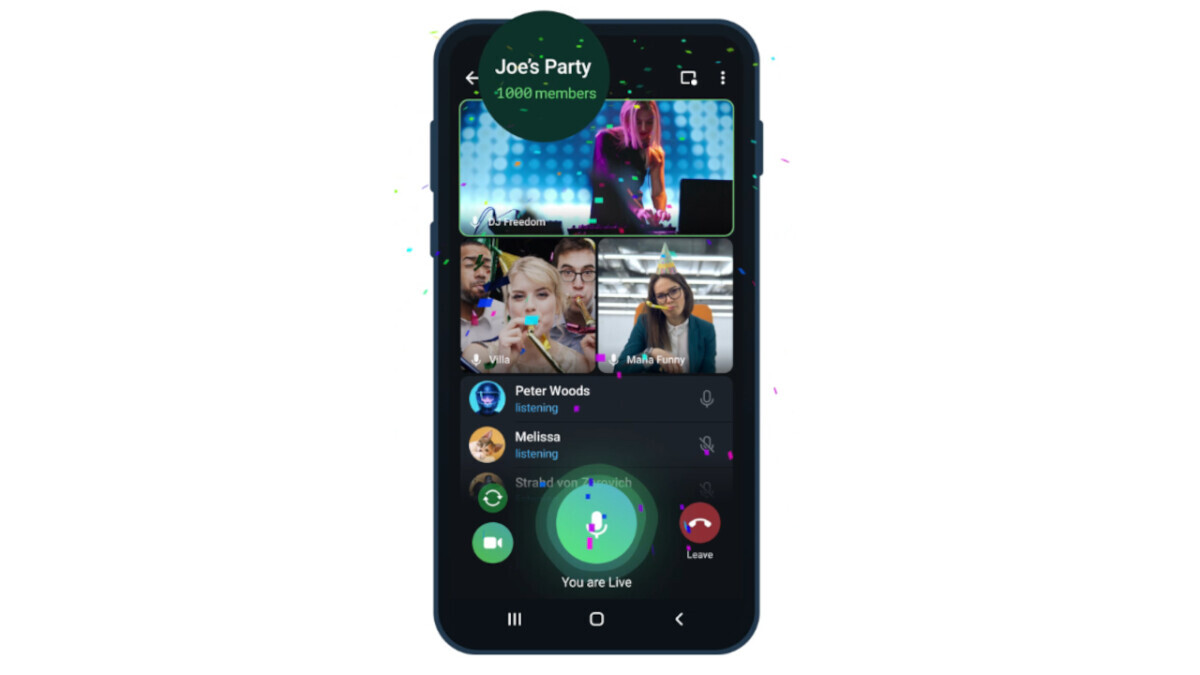 Telegram has become quite popular after the WhatsApp privacy controversy and it has been keen on adding new useful features to its growing number of active users. Now, Android Authority reports that Telegram has brought another feature to its set: unlimited participants to video calls and live streams.

With the new Telegram version 8.0, you can have as many participants in a group video call as you like, and the same applies to live streams. Participants can use the hand-raising feature if they want to contribute to the conversation, of course, if you have allowed for this feature during the group call. To start a group video chat, you need to navigate to “Video Chat”, situated in Groups, and for the live stream, you can go to “Live Stream” in the Channels section of the app.

Unlimited participants to the group calls and live streams on Telegram isn’t the only feature this new major update has to brag with. Another useful feature is also introduced, called Flexible forwarding. This functionality allows you to show or hide the caption when forwarding, and the same is applied to the sender. Additionally, the preview window lets you change the recipient if you have unwittingly tapped on the wrong chat.

Another notable feature added with this update is the Jump to Channel feature. This is helpful if you have organized your chat list with Folders and Archived chats. The new feature allows the app to follow the structure you have set up: channels in the current folder, then within each folder, then those left will be positioned in All Chats and the Archive. On top of that, Telegram 8.0 makes it easier for you to find the exact sticker you want. The Trending Stickers will appear above ‘Recently used’ in your sticker panel, so you will have the most popular and fun ones at a glance. Additionally, when you scroll through your sticker packs at the top of the panel, the thumbnails expand and show the names of the sticker packs for more convenience. And, the Telegram for Android app gets larger previews for the sticker suggestions as well.

Of course, tapping a word in the search field will display sticker suggestions as well.

Alongside these changes, a counter for unread comments will now appear, as well as some new animated emoji.

Many of you may probably know, but in January, WhatsApp introduced a new privacy policy and terms that claimed users should allow the app to share information with Facebook, and quite understandably, the decision sparked controversy. Many users then started abandoning WhatsApp and going to the privacy-focused app Signal or Telegram.

After the sudden rise of popularity that surprised Signal and Telegram, both apps’ developers were quick to start developing their structures and services even more, in order to answer to the suddenly huge demand on the part of users. In June, a Telegram update brought to the app’s users group video calls and animated backgrounds for chats, and on top of that, the option to share your screen during group video calls. Back in January, when the WhatsApp privacy controversy was unfolding, Telegram got millions of new users. Notably, around 25 million users joined the app’s services in a period of just three days when all of this was going on. At the time, the app didn’t have group video call functionality at all, and it was introduced back in May.

vivo V21 5G certified in Indonesia ahead of launch