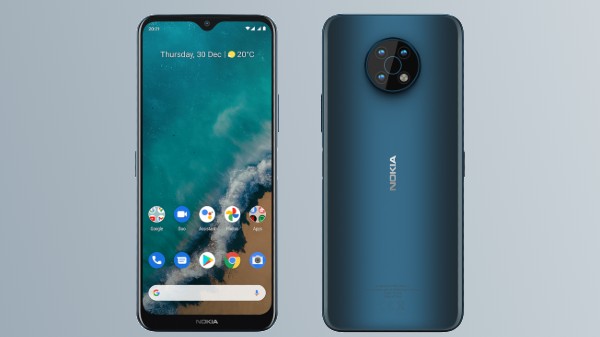 We have already come across reports regarding an upcoming smartphone from HMD Global – the Nokia G50 5G. This smartphone is expected to see the light of the day sometime this month. As we are nearing the launch of the device, a fresh report has shed light on the key specifications and possible design of the upcoming Nokia smartphone.

From the leaked renders via Winfuture.de, the Nokia G50 5G appears to arrive in two color options – Ocean Blue and Midnight Sun. It seems to feature a plastic housing as many other smartphones from the brand and a fingerprint sensor at the side embedded into the power button. Apart from these, we can see the presence of a circular camera module at its rear with three camera sensors arranged around it with an LED flash unit.

As per the existing reports, the Nokia G50 5G bestows a 6.82-inch IPS display with a FHD+ resolution of 1640 x 720 pixels. Under its hood, the smartphone in question is tipped to make use of an octa-core Snapdragon 480 processor along with 4GB of RAM and 128GB of storage space. The other hardware aspects include a 4850mAh battery, a USB Type-C port for charging and a 3.5mm headphone jack.

For imaging, the upcoming Nokia smartphone is said to house a triple-camera setup at its rear within the circular camera arrangement. The camera module might comprise a 48MP primary camera sensor, a 5MP secondary ultra-wide lens, and a tertiary 2MP depth sensor. At the front, it is said to arrive with an 8MP selfie camera. It is believed to support FHD 1080p video recording with 30 fps.

Running Android 11 OS without any customizations, the Nokia G50 5G will come with two years of software updates and three years of security updates. The other aspects include standard connectivity features such as NFC, Bluetooth 5.0, Wi-Fi 5, and a side-mounted fingerprint sensor. It is tipped to measure 8.85mm in thickness and weigh around 190 grams.

Well-known tipster Roland Quandt took to Twitter to reveal that the Nokia G50 5G might be priced at 259 or 269 euros (approx. Rs. 23,000). We can expect it to arrive with two years of warranty as well.