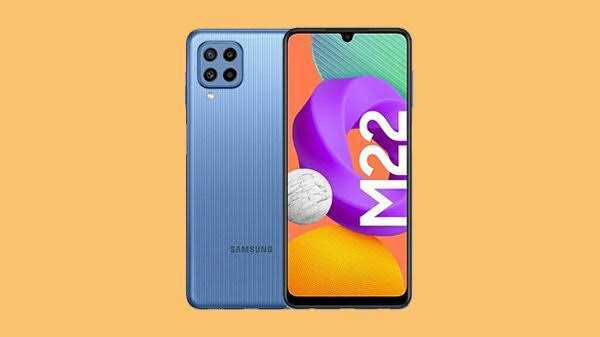 Samsung has announced the launch of the new M-series handset named the Galaxy M22. The camera module of the smartphone looks similar to the Galaxy A22 4G variant. Besides, Samsung has also used the same 90Hz sAMOLED panel for the Galaxy M22. Other features of the Samsung Galaxy M22 include a 5,000 mAh battery unit, 48MP quad cameras, and much more.

The Samsung Galaxy M22 is now listed on the official site of Samsung Germany. The device will be available for purchase in the sole 4GB RAM and 128GB storage option. However, the pricing is still under wraps. Further, the Galaxy M22 comes in three color options – black, blue, and white.

Moreover, the 128GB of onboard storage can also be expanded up to 1TB via a dedicated microSD card slot. For cameras, the smartphone offers a quad rear camera setup hosing of a 48MP main camera with an f/2.0 aperture, an 8MP ultra-wide lens with f123 degree field-of-view, a pair of depth and macro sensors. For selfies, there is a 13MP camera sensor placed into a notch.

HBO Max will stream 2021 slate of Warner Bros. movies on the same day as theatrical release