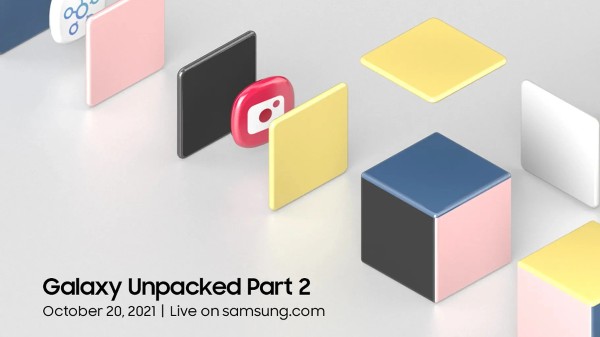 Recently, Apple announced that it will host an event on October 18 to unveil the next-generation devices such as MacBook Pro and AirPods 3. Soon after the same, the South Korean tech giant Samsung announced that it will host the second part of the Galaxy Unpacked event or this year. Dubbed the Samsung Galaxy Unpacked Part 2 event, it is all set to be hosted on October 20.

Samsung will live stream the event on its official YouTube channel. The event is set to debut at 7 AM PT (7:30 PM IST) on October 20. This falls in line with the Apple and Google launch events slated for October 18 and October 19 respectively. Samsung has already started sending media invites for the event.

As per existing reports, Samsung is believed to take the wraps off the Galaxy S21 FE smartphone in the near future. Given that the brand is speculated to launch a new smartphone at the event next week, we can expect it to be the Galaxy S21 FE or new mid-range devices that we have been coming across via speculations.

Reportedly, the Samsung Galaxy S21 FE is expected to make use of an octa-core Snapdragon 888 processor, which powers the current-generation flagship smartphones. Due to the supply chain issue, the company might not use the in-house Exynos chipset in the upcoming model. Given that it is the world’s largest smartphone brand, Samsung was expected to take the wraps off the Galaxy S21 FE alongside its foldable flagships in August but the same did not happen. Eventually, the SE model of its flagship S series smartphone is expected to be unveiled this month.

Being the toned-down variant of the Samsung Galaxy S21 series, this upcoming model is expected to be priced around 700,000 won (approx. Rs. 44,000). As of now, the company has not confirmed anything about the smartphone and we need to wait for further details. However, it is claimed to feature a 6.44-inch display with support for 120Hz refresh rate. We need to wait for further details to surface online revealing what we can expect from the company at the Galaxy Unpacked Part 2 event.

One UI 4.0 stable version will start rolling out in December, according to a Galaxy S community moderator