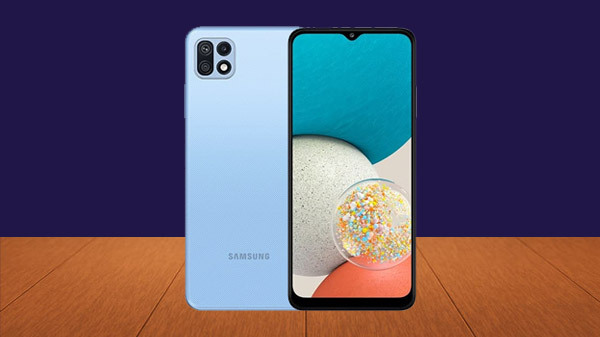 Samsung has launched a new affordable 5G smartphone in its home country South Korea called the Galaxy Wide 5. The latest Samsung offering is equipped with the Dimensity 700 processor and a triple rear camera setup. The device will be competing against the likes of the Poco Me Pro 5G and the Realme 8 5G in the international market.

The Samsung Galaxy Wide 5 has the octa-core Dimensity 700 processor, under the hood. The affordable 5G MediaTek processor is paired up with Mali G57 MC2 GPU and 6GB RAM. The device will be available with a 128GB storage configuration. There is also up to 1TB external microSD card support.

Upfront, the Samsung Galaxy Wide 5 features a 6.6-inch IPS LCD display. The panel supports 1080p FHD+ resolution. However, the refresh rate is standard at 60Hz. Also, the panel comes with a traditional V-shaped notch instead of a punch-hole cutout. The notch houses an 8MP camera with an f/2.2 aperture for selfies and video calling.

The Samsung Galaxy Wide 5 has Android 111 OS pre-installed which is topped with a custom One UI skin, Besides 5G, the device offers standard connectivity options such as Wi-Fi, Bluetooth, a 3.5mm headphone jack, and a USB Type-C port. The unit has a fingerprint scanner integrated with the power key. The handset gets its power via a bug 5,000 mAh battery which has 15W fast charging support.

The Samsung Galaxy Wide 5 has been launched in South Korea at KRW 450,000 which translates to around Rs. 28,270 in Indian currency. The device will be available in black, blue, and white colour options. The company is yet to reveal its global launch date.

Is Galaxy Wide 5 The Galaxy F42 5G For The Indian Market?

Madhav Sheth talks about the upcoming Narzo 30 phones, the Realme GT launch in India and more