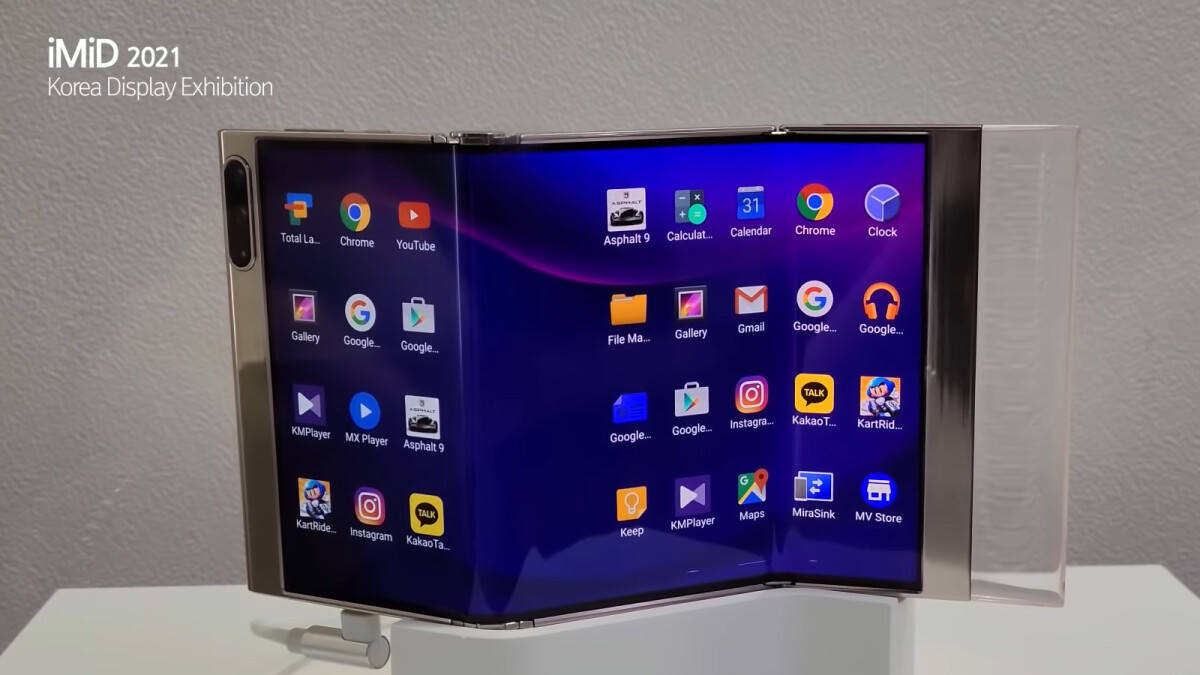 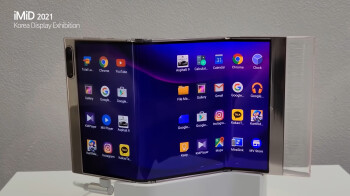 Samsung has recently released a short video on its Samsung Display YouTube page, showcasing an impressive prototype of a new folding display the company has developed.

The video was taken at iMid, short for (no, it has nothing to do with Apple) the “International Meeting on Information Display,” which was held in Seoul, Korea, from August 25-27 this year. Barely 30 seconds long, the clip only shows the device on exhibition from a couple of angles, giving us a brief glimpse without any specs or details about its inner workings.
The display on display (pun intended) was a fully working prototype of a Samsung smartphone featuring a three-way-folding screen OLED screen. Essentially, it folds into itself origami-style into an S-shape, with both outer screens folding in onto the middle display at opposite edges.

Named “Flex In & Out,” when this display is triple-folded into its maximally compact form, it presents almost any regular smartphone (albeit extra thick and elongated), with the screen spanning 7.2 inches, and can be easily carried in a small purse or even a large pocket.

When fully unfolded, however, the Flex In & Out transforms into a large tablet with three separate screens, each of whch supports multi-screen multitasking. In other words, you’d be able to do three different tasks at the same time on this bad boy, which could make many working people’s lives easier indeed, if such a concept goes mainstream someday.

Though impressive, it isn’t hugely surprising that Samsung is working on such an innovation already. The Korean company is famous for its innovative mobile display technology, and is a leading vendor in the display industry worldwide.

While a triple-folding phone hasn’t made it to the market just yet, a few weeks ago, Samsung released its much anticipated double-folding phone, the Galaxy Z Fold 3, as well as the Galaxy Z Flip 3. Highly impressive phones in their own right, they can already be purchased from a number of vendors in the US:

Google, inspired by Apple, is developing custom chipsets for tablets and Chromebooks

Apple starts rolling out eighth beta of iOS, iPadOS and its watch and TV OSes