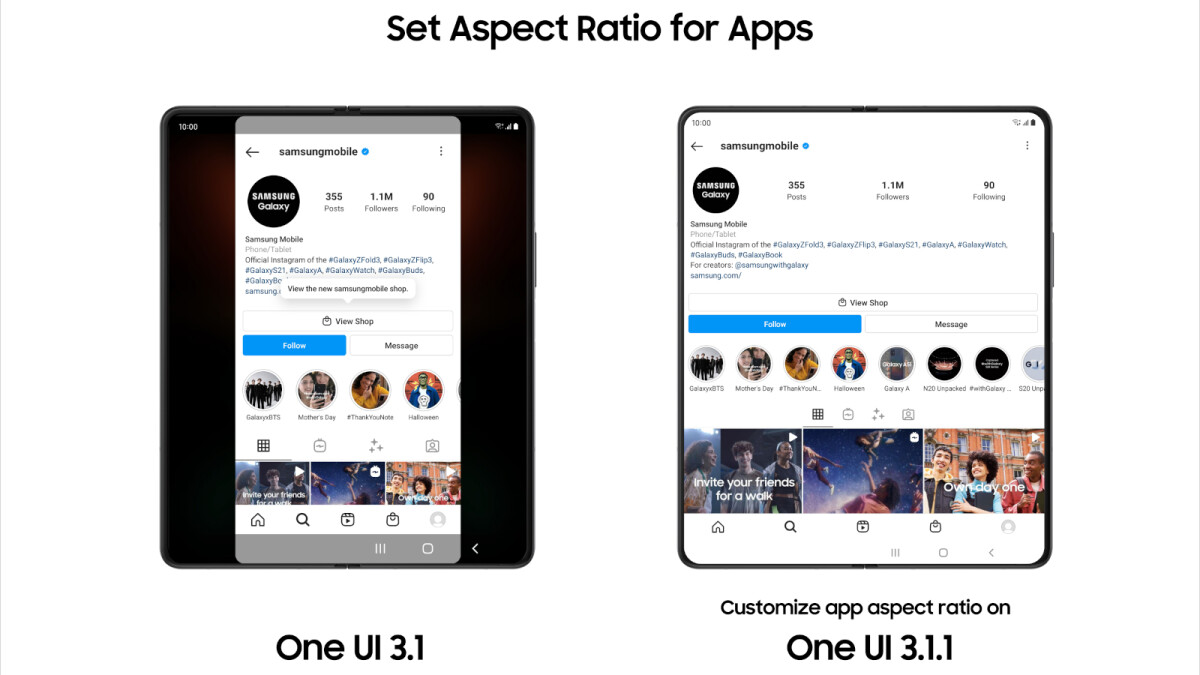 Samsung is stepping up its foldable game with a new software update meant to brings new experiences to those who bought Galaxy Z series foldable handsets. Since Samsung’s latest Galaxy Z Fold 3 5G and Galaxy Z Flip 3 5G already ship with One UI 3.1.1, the update announced earlier today will be rolling out to older foldable smartphones.Starting August 31, One UI 3.1.1 will be made available on the following Samsung foldable smartphones: Galaxy Z Fold 2 5G, Galaxy Z Flip 5G, and Galaxy Z Flip. The South Korean company revealed that the original Galaxy Fold launched two years ago will also receive the update in about one week from now.

Samsung’s foldable UI is one step closer to awesomeness

Several new features make One UI 3.1.1 a great update for foldable smartphones. The first one is the ability to set aspect ratio for apps so that you can maximize the benefits of your phone’s Infinity Flex Display. The new update lets Galaxy Z series users change the size of an app, completely removing the black bars on either side. Four options will be available from the Labs: full screen, 16:9, 4:3, and App default. Another major change added in One UI 3.1.1 is the so-called App Split View, which is especially helpful when used with Messages app. Thanks to the new feature, you can now have a message list on the left of the screen and your selected conversation on the right. Also, you’ll be able to expand either side to full screen by simply clicking a button at the top of the conversation or message list. Keep in mind that App Split View may not be supported by all apps, so you’ll have to go to Labs, tap App split view, and select apps for the App split view to enable the feature.

Drag & Split is another useful feature available to Galaxy Z series users. It works with popular apps like Samsung Internet, Samsung Notes, My Files, Messages, MS Office, OneNote, OneDrive, and more. With Drag & Split, you can drag a link that you want to check to the edge of the screen and open it in a new window to be viewed simultaneously.

A similar feature that will be added with One UI 3.1.1, Multi-Active Window, lets users handle up three apps at the same time on their screens. Each separate window can be adjusted in height and width to suit your needs. Since not all apps support this feature, you can enable it for those without built-in support by heading to Settings / Advanced Features / Labs / Multi Window for all apps.

Besides the fact that the size and shape of each window can be adjusted, you’ll also be able to change the layout of how these apps are displayed on the screen. You can drag and drop an app to the desired location by simply pressing on the top handle of the window.

Smoother transitions between portrait and landscape

With One UI 3.1.1, Samsung has finally fine-tuned the transition between portrait and landscape mode. With the new Rotate All Apps feature, all apps on the Galaxy Z series will transition to the proper UX to match portrait or landscape aspect ratio smoother than ever. Make sure to toggle the new feature from Labs / Auto rotate apps / Choose between two options: Keep app’s orientation or Match phone’s orientation.The next addition to the One UI 3.1.1 is not a new feature but an enhanced iteration of an already existing one: Flex mode. With the new Flex mode panel, Galaxy Z series users benefit from easier control of media while watching TV. Although you will be able to enable Flex mode for apps that don’t typically support it, the toggle switch will only be shown if the app supports the feature.

The last two new features included in One UI 3.1.1 – Cover Screen Mirroring and the ability to pin apps with taskbar, are purely cosmetic. The former lets you have the same set up and layout of the home screen on both Cover and Main Screen, while the latter lets you use Taskbar to pin apps to the side of the Main Screen (where the Edge Panel used to be located) for quicker access.